By TODD BENSMAN FOR DAILYMAIL.COM as published January 10, 2023

Watch closely America, President Joe Biden is about to perform his greatest border crisis cover-up yet.

It’s a scheme to hide a massive new acceleration of human inflows into the United States behind trickery, misdirection, and probable illegality – and then laughlingly call it progress.

With the midterm election safely in the rear-view mirror, Biden figured he could risk dragging the White House press corps down to the border to shut up the barking Republican dogs.

But the three-hour drive-by and hasty photo op at a border wall section cleared of illegal immigrants reflected nothing of the record-smashing five million-plus border illegal crossings since his inauguration.

Prior to his arrival, migrant encampments crowding El Paso’s streets were torn down and the migrants were convenient bused to Mexico.

It looked tidy. The grim truth swept under the rug.

This fits puzzle-perfect with Biden’s two-year cover-up strategy: draw as little attention as possible to the historic mass migration crisis his policies have wrought.

But here’s where American’s must take notice.

In reality, the Biden administration has, out of thin air, created a parallel immigration system outside the authority of Congress and the American people.

The faux-system is predicated on a very narrow power provided by the Immigration and Nationality Act allowing the Secretary of DHS to grant something called ‘humanitarian parole’ admittance.

The law says humanitarian parole can be given to individuals ‘on a case-by-case basis for urgent humanitarian reasons or significant public benefit.’ But Biden will apply this to hundreds of thousands of people a year without any individual case-by-case review.

The plan will permit 30,000 migrants a month, 360,000 a year, from four qualifying countries to enter and work in America if they have U.S. sponsors and clear background checks, under the presumption that they will one day apply for permanent asylum.

And what happens if these hundreds of thousands just disappear into America’s vast underclass of undocumented citizens?

The answer seems to be – oh well.

This ‘alt-immigration’ plan constructs a brand-new one-way pipeline over the southern border that will fill America with the millions of people who were likely planning to cross illegally anyway.

Nor does this made-up process channel entrants into congressionally approved visa or refugee application programs.

Perhaps as politically important as those statistics, with 2024 national elections on the horizon, there’d be no more crazy El Paso scenes of illegal immigrant chaos as happened during December and early January.

There may be no more politically embarrassing Del Rio migrant encampments like the one with 17,000 Haitians that formed in September 2021 and drew international media attention.

If this sleight of hand works, Biden and his deputies will point to falling ‘illegal immigration’ statistics and tell America that it has ‘reduced illegal immigration,’ brought order, and hope no one pays attention.

Because when all this administrative relabeling is done, the administration will still have imported hundreds of thousands – maybe even millions – of migrants who will burden and transform the United States just as surely as they would had they jumped the border.

Instead, they will have come in by dint of nefarious bureaucratic trickery.

There will be no public debate, no accountability for the elected officials, who Americans entrust to vote on these policies.

The State of Florida has sued the administration in federal court alleging the use of the humanitarian parole authority on masses of people is illegal and unconstitutional. 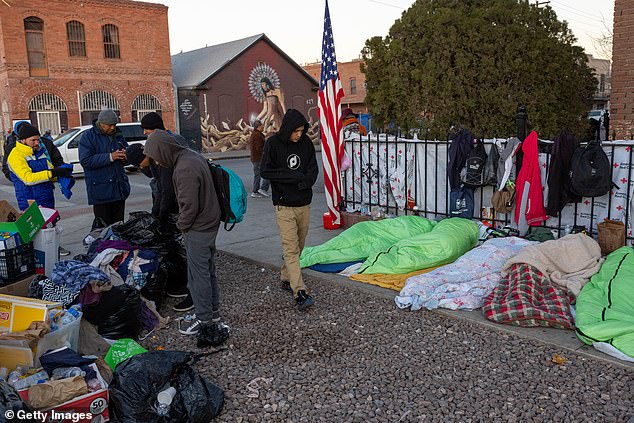 Prior to Biden’s El Paso arrival, migrant encampments crowding El Paso’s streets were torn down and the migrants were convenient bused to Mexico.

The administration’s fakery should be suspended under court orders. But in the meantime, the fraud will entice many hundreds of thousands of people to use it, and why not?

Instead of the immigrants spending big money on cartel smugglers for the illegal crossings, they’ll be escorted by waiting US custom officers, who will release them into the country with work authorizations in hand.

And if they don’t qualify for humanitarian parole? Plan b is a good old-fashioned border jump.

Sure, the Biden administration threatens to slap a 5-year reentry bans on those who get caught trying to cross illegally or are deported. But the Biden track record inspires no confidence that it can be trusted to suddenly start real enforcement.

This Orwellian-titled ‘enforcement’ plan is no solution to the crisis. It will only make it worse by pumping steroids into the raging bull of border immigration.