By Todd Bensman as published December 15, 2022 by the Center for Immigration Studies

AUSTIN, Texas — Maybe to help America more easily absorb the shock of the arrival of as many as 18,000 illegal border-crossers a day expected when Title 42 is lifted December 21, Biden’s Department of Homeland Security has issued a public memo describing its unprecedented preparations.

Buried deep within DHS’s “Update on Southwest Border Security and Preparedness Ahead of Court-Ordered Lifting of Title 42” is a “6-pillar” plan that includes expansion of a highly unusual and legally questionable operation wherein Mexican authorities hand off immigrants directly to U.S. Customs and Border Protection officers at ports of entry all along the southern border. These migrants are already tentatively approved while inside Mexico and set up for quick U.S. work authorization after they are hand-delivered to CBP inside port buildings and admitted into the nation. (My colleague Andrew Arthur has addressed a different aspect of the memo.)

There is no name for this port hand-off operation, which a November Center for Immigration Studies report revealed at length in Mexicali, Mexico, and no major American media outlet has reported its existence. Until confirming it now as “Pillar 2” of the new plan, DHS had never previously announced or advertised it.

But “Pillar 2” calls for DHS to expand the use of these port hand-off operations to “mitigate potential overcrowding” in border towns of the sort that drew intense negative international media coverage in September 2021 when 17,000 mostly Haitians suddenly formed a vast, fetid encampment under the international bridge in Del Rio, Texas.

The new DHS document document describes the initiative this way:

CBP also developed capability within the CBP One mobile application to support advanced information submission and appointment scheduling at Ports of Entry (POEs) by noncitizens. This lawful process will increase the capacity of CBP to process intending asylum seekers at POEs after the lifting of the Title 42 public health order.

See the CIS written and video reports in “Legalizing Border Crossing for All: Next Up for the Biden Mass Migration Crisis”. 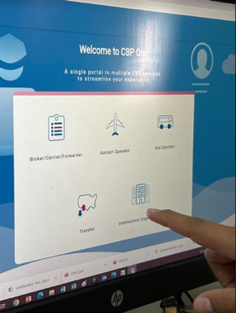 The Center for Immigration Studies gained unfettered access to one of these escort hand-off operations in Mexicali, Mexico, where municipal officials given U.S. passwords to access the CBP One portal twice a day input the names of 100 or so immigrants rather mysteriously chosen for U.S. “humanitarian parole” while still in Mexico. I interviewed the managers of four different shelters in Tijuana and Mexicali that were part of a rapidly expanding system of shelters feeding untold thousands of Mexicans, Hondurans, Salvadorans, Guatemalans, Russians, Afghans, Africans, and others into the port hand-offs.

Helping the applicants to quickly assemble U.S.-required documentation were international non-governmental organizations of all stripes, American immigration lawyers and law students, psychologists, and the UN’s International Organization for Migration.

Much of the DHS document comes across as raw political posturing (“DHS has effectively managed” the border”), blame-deflection for administration policies that triggered the historic mass migration crisis, and message-framing for the coming onslaught. The management plan it entails seems designed mainly to prevent the kind of political damage that the re-appearance of something similar to last fall’s overcrowded Del Rio migrant encampments would cause if they are not prevented by every possible means — with DHS blaming smugglers who spread disinformation amid global instability fueling the highest levels of mass migration since World War II.

One of the port hand-off operation’s side benefits in the service of these political considerations, of course, is that news drones flying overhead can’t record it happening inside closed shelters and government buildings. Also, none of the thousands who get admitted at ports of entry will be included in the politically problematic statistics of Border Patrol “encounters” of illegal border-crossers because, technically, they have been “legalized” to cross at ports of entry before they even get to the border.

More problematic for the Biden administration in the political calculus of the coming border management challenge is the fact that the memo now confirms it is counting on the escort-hand-off operation to “mitigate overcrowding”, even as experts question the legality of doling out “humanitarian parole” status on a mass scale. That comes from the administration’s creative interpretation of an authority granted in the Immigration and Nationality Act, but only on a narrow case-by-case basis.

”Humanitarian paroles are not supposed to be handed out in mass numbers to large categories of immigrants,” said CIS Director of Regulatory Affairs and Policy Elizabeth Jacobs, a former U.S. Citizenship and Immigration Services official, when the escort hand-off program was uncovered by CIS in November.

“Humanitarian parole was never intended to be used this way,” Jacobs said. “If these accounts are true, the United States government is acting directly in conflict with the limits and procedures established under federal law. Escorting inadmissible aliens into the United States for the sole purpose of granting these aliens work authorization is a blatant abdication of DHS’s responsibility to uphold federal immigration law.”

Unless or until it is pointedly challenged, this secretive escort hand-off operation referenced in the DHS plan’s “Pillar 2,” as revealed by CIS in its November report, is going to form a foundation of this the next new phase of the Biden border crisis.